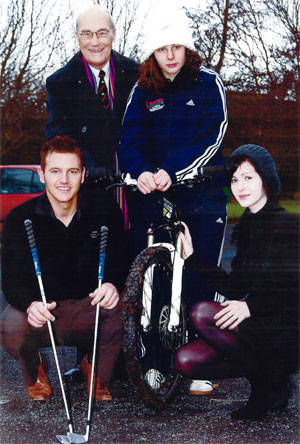 Charity is setting wheels in motion

A potential Olympic cyclist, and aspiring writer, and a talented golfer are being helped to pursue their hopes and dreams by a little-known Lancaster charity.

The George Fox Educational Charity has provided funding to Ella Sadler-Andrews, Victoria Smith and Jonathon Salisbury and is hoping to do the same for more young local people.

The charity has provided a new training cycle to help Ella, 18, pedal towards her quest to make the 2012 London Olympic Games; while Victoria, 21, can study for a contemporary fiction master’s degree thanks to some funding; and Jonathon, a 23 year old assistant golf professional at Lancaster Golf Club, has honed his skills while backed by George Fox.

Ella said: “I would not have been able to afford my bike. It is a specialised training machine that is now allowing me to push myself to the limit.”

Ella has already represented Great Britain as a junior track and road cyclist and later this year will road race in Belgium. She comes from a family of cyclists going back four generations of competitive racing.

Victoria, a former Morecambe High pupil, is currently studying for a master’s degree in contemporary fiction at Kingston University.

“It was just what I wanted,” said Victoria. “But my mother is a single working mum and I needed support. Thankfully the educational charity was able to help.”

Victoria has already penned a draft manuscript for a semi-fictional account of her teenage years, set in the Lancaster area.

Since School, Jonathon Salisbury wanted to be a golf professional and his talent was quickly recognised at the Lancaster club where he won numerous competitions and where he’s an assistant professional. Jonathon, a former Garstang High School pupil whose dad attended the old George Fox School, is in his final year of qualifying as a PGA professional.

He said: “Golf really has been my life. The funding the charity has provided has meant that I could concentrate totally on my golf studies.”

The George Fox School Educational Charity can help young people in North Lancashire and South Lakeland. There is particular emphasis on promoting education and helping in provision of facilities for recreation and other social welfare.

“I was overjoyed when reading my letter, and I appreciate your very generous funding to help me pursue my passion for Golf.”
T. McCann, aspiring Professional Golfer
“I want to say thank you to The George Fox Trust Educational Charity for making it possible for me to undertake the Master’s Degree Programme at Kingston University. I have attained straight A grades and at the Kingston University Creative Writing MA Award Show 2010 I was awarded 1st place academic achievement.”
Victoria Smith, aspiring writer

Are you ready to take the next step?